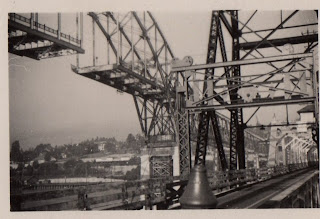 New Westminster was the ideal location for a bustling metropolis, built up by the Royal Engineers as British Columbia’s first capital. Today it is known as that suburb you drive through to get downtown.
My family is from here. My great grandfather came to this city through Montreal from Manchester, England. He raised a family in a duplex, still standing, on the corner of 10th avenue and third street. He was a carpenter at the BC Electric trolley factory at the bottom of 12th st. My grandfather studied at UBC and was a biologist for the Department of Fisheries and Oceans on the Fraser. He and my Grandmother, a head nurse at Riverview, raised their family in a house on 7th street, across from Lord Kelvin Elementary. It was only recently torn down and replaced. My Grandfather shot the photograph on this post; the construction of the Putello Bridge in 1937.
I was raised on First Street with my family and now I raise my children in the West End, near Lord Tweedsmuir Elementary. This website is to illustrate just what kind of town New Westminster is. It has often had an undeserved reputation but I have always known it as the perfect jewel in the center of the Lower Mainland. Tightly knit, self sustainable yet fully a part of the greater metropolis around it, New Westminster sits at the intersection of our regional commerce and the heart of our regional identity.
Here, I hope, you will read interviews with notable personalities within ours, the Royal City; explanations of current events, political goings-on and a place to showcase features of our city in our past and present. It is an interactive site, so feel free to contribute.
There is a lot to look forward to! We have an upcoming civic election, featuring for the first time the newly formed Voice New Westminster slate. We have seen a vast change in the city since 1986 and certainly in the last five years. In my view, New Westminster could be the jewel box of the lower mainland. With defined, tightly knit neighbourhoods, heavily integrated transit options and a distributed commercial base, New Westminster is a city for its Citizens. I invite you to explore it with me.