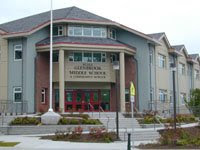 Royal City Blogger Niki Hope, who excels at all things educational in her website, has recently posted that the Glenbrook Middle School Parent Advisory Council has passed a resolution that, while focusing on the need for a new High School, also calls for the use of Grimston Park as a school site for a middle school.

While the idea of a school on Grimston has been almost universally reviled by the West End community (see Facebook Page Here) and the need for a middle school is still hotly debated, I don’t personally see why the Glenbrook folks (and fine folks they be, I am sure) would really concern themselves with building a middle school way on the other side of town. Perhaps the Westend folks could suggest the removal of Queens Park in favour of a municipal waste to energy incinerator (you see, I am exaggerating for effect).

The content of the letter is below. I invite all concerned to comment here. I will try to have expounders of the Grimston School topic (for and against) send in comments also.

As the Parents’ Advisory Council (PAC) for Glenbrook Middle School, we are writing to you regarding the school construction public consultation process in our City. After significant discussion at our meeting on November 24, 2008, the PAC passed the following motion:
THAT the ÉCOLE GLENBROOK MIDDLE SCHOOL PARENTS’ ADVISORY COUNCIL:
• urges the construction of the high school move forward as soon as possible:
• supports the idea of building a new middle school on the west side; and
• believes that Grimston Park should be considered as an option for that middle school.
CARRIED.

In our view, it is absolutely critical that this initiative – AND PARTICULARLY THE HIGH SCHOOL – move ahead as quickly as possible and NOT be allowed to “go back to the drawing board.” Too much time and money have already been spent and further delays will only continue to compromise the education of all our children.